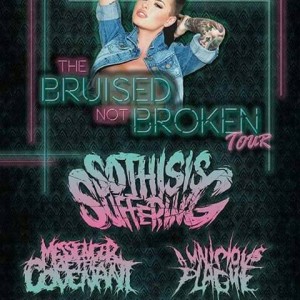 A Malicious Plague have gained notoriety in the NM metal scene through their unique brand of melodic, technical brutality. I had a chat with vocalist Efren Castaneda, bassist Joshua Franks, drummer Dion Elliot, and guitarists Daniel Castaneda and Daniel Guerra to discuss the upcoming Bruised Not Broken Tour.

Tell me about the Bruised Not Broken tour and the other bands in the line up.

Efren: So This Is Suffering is getting up there, they’ve been in the scene for a while and they bring a crowd. And Messenger Of The Covenant, I have no idea.

Will this be your first time going on tour as A Malicious Plague?

Where are you going?

Daniel G: It’s a Southwest tour. Texas, New Mexico, California, Las Vegas… Nothing in Arizona though. No love for the AZ.

Dion: We tried though.

Daniel G: We tried to get one more date.

From my experience as a promoter, I know that touring is vital to a band’s success. The bad news is that it can also be a real pain in the ass. You can get really bored, or you can get really sick of each other. Are you prepared for that?

Joshua: There will be a shovel in the back.

Joshua: Hell yeah, popcorn, and some body bags, and caustic lye. I think we’re ready for that. We’ve already gone out of town a few nights, done some overnighters. We’ve been stuck in the same van with each other, had to yell at each other. We’ve been together long enough that I think we understand each other’s temperaments. We kind of know where the line is with each other. I’m just gonna fucking take a pill and sleep the whole time.

Do you have any albums released or in the works?

Daniel C: Right now we don’t have anything. After we get off of tour, whatever merchandise we sell, we’re going to save up and then hit up Mike Apodaca from bleeding hearts. That’s our plan.

Joshua: It’s the same guy who did Eat A Helicopter’s stuff. He also did Siddhartha, and  he’s doing Aralyn stuff.  He’s also done Savage Wizdom. Those are the only relevant bands I can think of.

Joshua: I’d say as of right now, Daniel Castaneda and I argue about it. He usually comes up with the riff and we work together on it. I’m not much of a writer but I like to structure songs. I try to play the role of the listener rather than the player. Our song No More Than A Monster was the first one that we collaborated together writing, and it came out to be one of our most beast songs.

What about your lyrics? Do you come up with them first and then make a song, or vice versa?

Efren: I usually listen to the song, and see what kind of feelings I get from it. You know, just like life and death.  No More Than A Monster is about a recent… something. But hopefully once we get that album out, I’ll have the lyrics out and then people can relate to what I’m saying, because it’s kind of like an everyday struggle. I wait for these guys to do their thing. I give input as to where I want something to be, so I can involve the crowd. But lyrics come after. It’s hard for me to do while these guys are making songs.

A Malicious Plague is a Death Metal band, but you deviate from the genre in certain ways. I’ve noticed the bass lines in particular. What bands inspired your unique sound? I think I’m hearing some Skinless in there.

Joshua: There’s a lot of bands. I love Skinless. For me, I played guitar for a long time, and then I got bored with that and decided I wanted to play bass. I’ve always wanted to hear people play bass. I love groove and nasty feelings in the bass.

Daniel C: A lot of my stuff is melodic, like As Blood Runs Black, At The Gates, Within The Ruins, Black Dahlia Murder. Good melodic riffs are what I really like.

Joshua: I hear a lot of John Gallagher in your playing too.

Efren: Vocally, I like the power of Whitechapel, I Declare War, Resist The Thought… And I love the highs of Cradle Of Filth. Those fucking highs are awesome.

Dion: Drum wise, I’m pretty much inspired by Chris Adler from Lamb Of God, and the drummer for Avenged Sevenfold, The Rev. I’m inspired by his style. Pretty much any other drummers from death metal bands. Those guys are the ones who got me into blast beats. Stuff like Resist The Thought, Thy Art Is Murder. So I kind of went from punk to death metal.

Daniel G: Cthonic is awesome. Their new album is sweet.

This interview is coming to a close now, so I just want to remind you that you are representing New Mexico on this tour, so make us look good, goddamn it. Before I let you go, is there anything you want to say to your fans?

Joshua: We love all our loyal fans.

Efren: The fans who have been with us since day one help us spread our passion. We’re kind of the scene, but we’re kind of not the scene. So it’s kind of difficult, but other than that we just love what we’re doing. Whoever supports us supports us.

Joshua: Buy the shirts, come to the shows. We space out our shows on purpose so we don’t bore the fans.