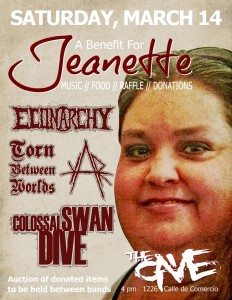 As we all know, benefit shows totally rule. They have the same great music as any other concert, but it’s all for a cause. In this case, there was also a raffle, chocolate cake, and frito fuckin’ pies. The final line up included two more bands than the flyer shows, which made the night even cooler. Here’s what happened:

Chronic Drought is a fitting name for a death/thrash metal band from Albuquerque, NM. Their music is very reminiscent of old school metal from the late 80’s and early 90’s, when death metal was still in it’s critical early stages and trying to find its definitive sound. Their coarse, unrefined style is actually a strong point, although the riffs can be a little repetitive. However, the wicked pick slides and unexpected embellishments in the drums keep things interesting.

Next up was Sylphs, a new band from Santa Fe. Although they were not as raw as Chronic Drought, they rivaled them in heaviness and surpassed them in melodic beauty. The music was very pensive and cerebral, but they need more time to establish themselves and find a more stable musical foundation.

Colossal Swan Dive is just three dudes playing grindy death metal. They were much crustier than the two preceding bands, but otherwise I don’t remember much. Granted, by this point, I might have blacked out, but I guess that’s none of your damn business. Plus, it would help jog my memory if they had some music on Reverbnation or Bandcamp (Hint, hint.)

Thankfully I won a massage in the raffle, because Yar gave me whiplash like a mother fucker.  As usual, they performed with unmatched fury and energy. They showcased some new material from an upcoming album, but the older track Emerald Cave still remains my eternal favorite. Yar encompasses everything I love about thrash: Speed, heart, and skill. Goddamn, almost three weeks later, and I’m still recovering.

Torn Between Worlds, as the name implies, have a chaotic style defined by incommensurate musical genres competing for dominance. Punk, hardcore, grind, and metal all vie in vain for the throne. The resulting entropy is music to my ears.

Out of a line up that was predominately metal, Econarchy was by far the most punk rock. Anarchy, revolution, and anti-establishment sentiments are the cornerstones of this band. The lyrics are politically charged and the music is high-octane, mosh inducing madness.

Before I give my rating, I’m going to flaunt my other winnings: Two bitchin’ prints by the extremely talented Leo Gonzalez. If you’re in need of some killer ink, hit him up at Stay Gold Tattoo in Albuqurque. Meanwhile, envy me, bitches. 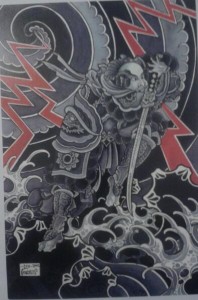 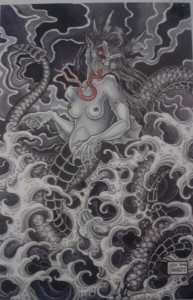 Trust me, they look even better in person.

The experience as a whole was very fun, but some of the music left a little to be desired. The crowd was really chill, and it was all for a good cause.  Four stars out of five.