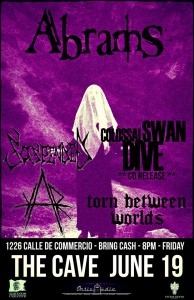 Metal is loud, The Cave is cool, something something skateboards, you know the drill.

The opening band was Torn Between Worlds, who have new material in the works. One track in particular, so new that it is still untitled, fucked my shit up. The aggravated, distorted guitars and intense gutterals were the epitome of power and fury.  There are some songs with a beat so fast and syncopated that you shouldn’t even try to headbang in rhythm. You’ll only injure yourself.

Colossal Swan Dive were up next. I have always admired their musical versatility while still standing their ground firmly in metal territory.  One song in particular started with upbeat tremolo picked arpeggios in the vein of surf rock, abruptly plummeting into a slower paced, sludgy metal style.  Throughout their performance, the guitar and bass utilized riffs reminiscent of grunge, alternative, metalcore, and a plethora of genres in between. The drums often stole the spotlight with outstanding rolls.

Suspended, an all female thrash band, has reunited with a vengeance. I fondly remember Suspended playing at The Compound (now defunct), opening for the likes of Goatwhore and Abysmal Dawn.   Although the line up and songs are now different,  the more recent tracks still retain the groovy bass lines, distorted riffs, and brutal drumming that won me over so many years ago. Admittedly, the new material is growing on me, whereas their older songs from the Prelude To Indignance era had me hooked from the start. While their upcoming album is still in production, these thrashers are shredding the stage with their energetic presence.

Hailing from Colorado, Abrams had elements of Prog, Post-Metal,  and Hardcore, resulting in an ambient yet heavy musical style. The gutteral vocals  contrasted with cleaner screams,  lethargic sludge riffs countered optimistic leads, all overlapping a solid foundation of steadfast percussion. Their music is more melodic than brutal, but still heavy in a cerebral, pensive way.

Unfortunately, the show got off to a late start, so by the time Abrams finished their set, I had to call it a night. I missed out on Yar, who played last. Vocalist Dave claims I “missed nothing.” Not true! Don’t put yourself down or I’ll kick your bitch ass.

The show was pretty good, but some songs were better than others. It was a nice hangout for a Friday night, but far from a rager. Three stars out of five.