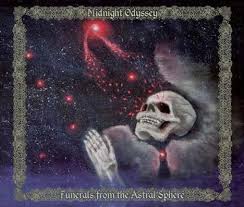 Clocking in over two hours, this is an album that demands patience and attention. The metal aspects and lethargic tempo work well together, creating an  atmospheric black metal that’s so serene that it hurts. The transitions between songs are pretty smooth, but there are many dynamic shifts in tempo and jarring key changes to keep the music engaging and interactive.  There are even some acoustic folk instruments and clean vocals, adding further dimension to an already multilayered,  complicated polyphonic arrangement.

The music is so fucking heavy that even the ambient parts are still dark and sinister sounding.  The instrumentals are too pretentious and saccharine for my taste, but they work with the cohesion of the whole album. The vocals are by far my favorite part, and so naturally I’m biased against the songs that lack the distinctive black metal shriek. For instance, Ode To Dying Spirits seems like a sophomoric attempt to recapture the psychedelic abandon and experimental freedom of the 70’s, when every rock band did ungodly amounts of acid  and made songs about their bad trips. However, on a much deeper level, it is a sincere, earnest piece that captures the frail human fear and awe of death. Lost is a similar track, but the vocals and acoustics are less experimental and more accessible to modern metalheads.

There are some songs so exquisite that they compensate for any weaknesses in the album. Against The Moonlight is the crown jewel, in which the folk elements and metal elements work together in perfect symbiosis.  Shores Serene, though softer, is distinguished with a winsome melody that lends itself to both distorted guitars and acoustic instruments, accompanied by clean singing.

The exceptional aesthetic beauty of this album completely overshadows its few flaws.  I think this embodies the quintessential atmospheric black metal album, capturing everything good, bad, and ugly of the subgenre. As such, I award it  five stars out of five.