I have a secret love for Pop- Punk. Laugh all you want, but I am still a badass Metalhead, despite my adoration for cutesy music. Besides, HN-88 are actually pretty freaking boss. Never mind that their name is random numbers and letters in the vein of Blink 182 or Sum 41. These guys write songs with the same subject matter as Metal… the Apocalypse, drug use, murder, sex,  and (if you count Metalcore as “Metal”), a combination of the latter two. Despite the intense themes, they sound catchy and upbeat. This is the kind of music that reduces a rocker girl such as myself into little more than just another coquettish, high-pitched groupie. It’s not my fault they’re dreamy. Stop yelling at me. 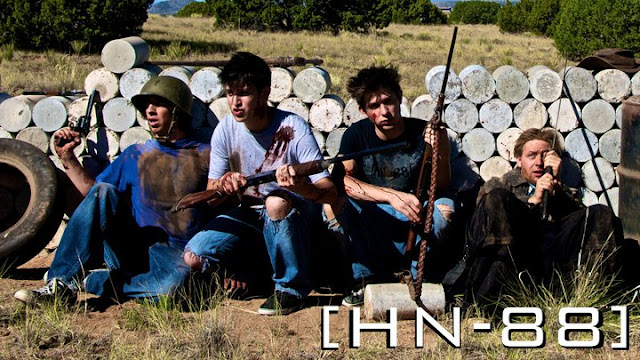 …Wait, ok, maybe they’re not that dreamy. Was I really sloshed at the last show or was the stage lighting deceptively flattering? I guess we’ll never know. But despite their delightfully hilarious physical appearance, they sound really good. Besides, now with this picture in my grasp, I have some leverage for future blackmail purposes. And another item in my “Stuff To Look At High” folder.

In all seriousness, these guys are great if you have nostalgia for the 90’s and old-school MTV. Back in my day, this is the kind of stuff that rocker dudes would play to impress their girlfriends. And as a chick, I have to admit, this makes us go wild. Metal will always be my favorite genre… Nay, my favorite THING EVER….  But the hottest guys in it are the fictional band Dethklok. Even other Metalheads admit, we’re kind of nasty. But HN-88 is totally adorable, despite all the evidence to the contrary, I.E that cheesy photo that I insisted on posting here because it’s funny.

See? They’re cute, they’re talented, AND they make girls laugh. These stupid assholes are basically my kryptonite. I honestly think they deserve five stars, but I resent them for interfering with my Metalhead image, so I’ll only give them four.

…Ah, fuck it. Here’s the other one. Those guys earned it. Those bastards…