Well, fuck. It’s been a rowdy ass weekend frought with mayhem and debauchery. Warehouse 21 hosted yet another Metal show on Saturday, but more about that later. Today, I’m going to focus on the craziness that was the Metal Alliance tour. First of all, it came to my neck of the woods on Easter Sunday. The Holy Day is a pretty weird time to do anything, let alone have a freaking Death Metal Concert. And on Zombie Jesus day, too?! Thankfully, I gave up Christianity for Lent, so I wasn’t too worried.
Unfortunately, the tour manager was kind of a bitchy diva, so the local bands had tiny sets. Seriously, I  missed half of Fields Of Elysium’s set just by blinking. They only played two songs, both of them recently composed, and both of which are available on the new CD. Last I heard, it only costs $7, and it has some killer cover art to boot. 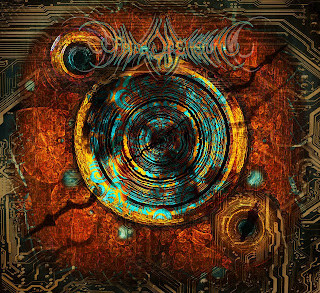 Whoah, trippy.
The other local band was From Sacrifice To Survival, who even in their 30 minutes (if that) pretty much upstaged the headliners. You don’t have to take my word for it though. They too have an EP, available to download for free. Heavy, intense, and insane.
The only other extaordinary band was 3 Inches Of Blood. Don’t get me wrong, the line up was truer than truth itself, but I couldn’t tell one band from the next, awesome though they were. 3 Inches Of Blood, however, stood out as a paragon of modernized Traditional Heavy Metal. Think the high-pitched hooks of Judas Priest juxtaposed with contemporary screams and riffs. It was amazing.
Like I said, I love all the other acts to death. That doesn’t mean I can differentiate them from each other. For the record, though, it was Wretched, The Faceless, Dying Fetus, Job For A Cowboy, and Devildriver. The lattermost band was the headliner, and boast one of the largest Circle Pits in history.
Speaking of mosh pits… I took a beating or two that night. I can usually fend for myself in a slamdance, but this time things got all crazy. I’m not complaining, mind you. It was cathartic as hell. Plus, I look like a badass now. I even have photographic evidence of how cool I am. 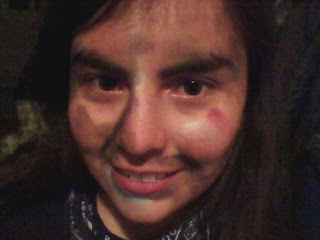 This might just be the brain damage talking, but I give it five stars outta five.