Have I mentioned that it’s a pain in the ass to type up reviews on a smart phone? It warrants repeating, regardless. This sucks. But on the bright side, I’ve been so swamped with awesome metal shows that my ears are still ringing. Anyway, here’s what went down recently: 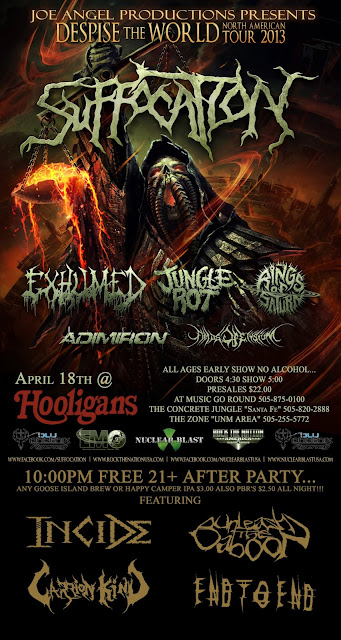 Much like Dante was unable to express the beauty of heaven in his Paradiso, despite the fact that he’s a fuckin’ famous poet, I can not articulate how sick this show was. Exhumed and Jungle Rot autographed my back-issue of Decibel magazine, and they put on one hell of a show too. Other than Fields Of Elysium, I have not seen any of these bands live before. The only way I can describe it is like getting hit by a Semi-truck and experiencing a spontaneous orgasm upon impact.
So basically, check the tour dates for Despise The World 2013 and book tickets in advance. It will hit your neck of the woods before you know it. Hey, if you’re lucky, maybe you’ll even get an after-party like we did in Albuqurque.
The very next day was the 9th Annual Music Night at the Museum of International Folk Art. It doesn’t have a flyer, because I guess gallery artists find them too uncouth. Well, I did start a museum-mosh-pit for the 2nd year in a row, and that is VERY couth. I also drank tons of their fancy-pants sparkling cranberry juice and made some obscene crayon drawings. Did I mention the whole thing was to raise awareness of AIDS/HIV? It was a good night.
I digress… There were only 2 bands that rocked hard enough for my memory to even retain their existence. They are Sun Plexus and On Believer. Sun Plexus is a female fronted alternative rock band. Basically, think Sublime meets The Pixies. And god-damn, can that guitarist make his instrument wail. Although I did love their music, we all know my heart lies elsewhere, in heavier territory…
On Believer is a Metalcore group comprised entirely of high-schoolers. It’s not what you think. They are a lot better than some whiney Bullet For My Valentine cover band. In fact, I’m impressed that such young kids have so much talent. Don’t get me wrong, there is definitely room for improvement. But if they sound this decent so early on in the game, I can’t wait to see them realize their full potential in the near future. 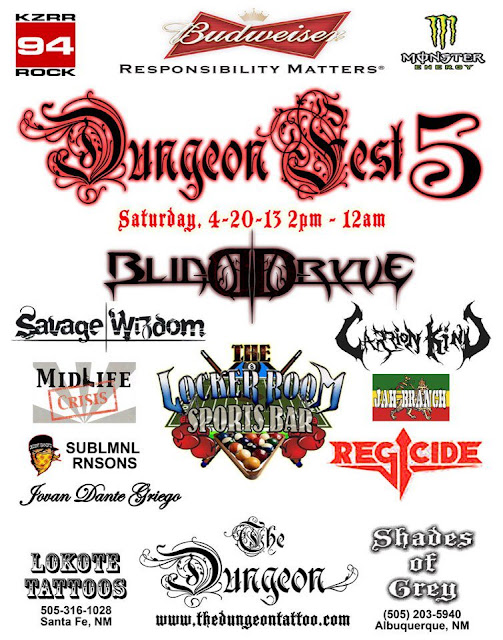 The very next day was Dungeonfest, which I  was unable to attend. Chances are, if you’re reading my blog, you didn’t see it either, and that makes me feel better for some reason.
Actually, no it doesn’t. We both missed a pretty sick line-up. Regicide is old-school grind metal, Carrion Kind is thrashy death metal, Savage Wizdom is traditional heavy metal in the vein of NWOBHM, and Blinddryve is like Nu-Metal.
In my defense, who the hell wakes up on 4/20 before 2 PM? No-one I know, that’s for sure.
Now to reduce my thoughts to a simple numeric value for each respective event:
Despise The World Tour obviously gets five stars:

The 9th Annual Music Showcase gets 3:

And I get a frowny face for being a slacker and not even getting off my ass to see Dungeonfest.