Do you like stuff like Whitechapel and Chelsea Grin, but your concert budget consists of of $20 and a bottle of cheap vodka? Worry no longer, comrades. Eat A Helicopter is just as awesome at a fraction of the cost. If you don’t believe me, here’s a music video. If you like what you hear, buy the album Descend Into Darkness,  available on Itunes. 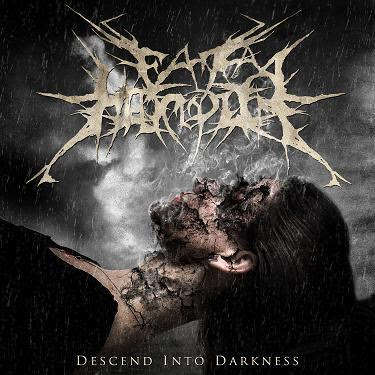 The drumming is the typical Metal style, a relentless machine-gun fussilade. The aggressive guitar riffs are reminiscent of the better Miss May I songs. The vocals sound like a pissed off demon. Unlike many Metal acts, the lyrics follow a traditional poetry structure of rhyming couplets and a solid meter. The result is not necessarily melodic, but extremely rhythmic. The music has an underlying groove to it, albeit agitated and heavy.

I rather enjoy the moments when the band vocalizes in unison. It sounds like an angry mob of protesters who are about to erupt into a headline-making riot. There’s something tribal, almost cult-ish about the “Us vs. Them” vibe I get from such moments. It’s morbidly intriguing. The lyrics are usually poignant without being preachy, but sometimes they are just plain boss. (“All you zombies bounce!” comes to mind here. )

The album art is brilliant in its simplicity: The band logo above, the unassuming CD title below, and a disintegrating hottie in between. The image on the back appears to be a sillhouette of a gravestone wrapped in barbed wire. Seriously, after the aforementioned cheap vodka and this bottle of pills I found, I couldn’t look away.

The CD’s lifespan is cut tragically short at about 16 minutes worth of music. I could listen to this stuff for hours on end. Thank God for the repeat button, His gift to humanity. The concerts are even better than the recordings. I love a good mosh pit, but I also know how to choose my battles. Stray away from EAH shows if you are faint of heart, lest you have a faint heart attack.

Seriously, these guys will put you in the hospital.