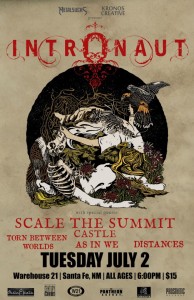 Metal is described as many things, but seldom as serene. Prog Metal line ups such as this defy preconcieved notions of the genre while still remaining TRVE and heavy. Nationally renowned bands Intronaut and Scale The Summit headlined this show, but it was immaculate from start to finish. In the beginning….

Distances of Albuqurque NM is defined by a dichotomy of overwhelming heaviness with intense beauty. You know those pictures of outerspace, where the nebulae look so striking but there is no rhyme or reason to their appearance other than the basic laws of physics? That’s like this band, making chaos seem gorgeous. The riffs, percussion, and vocals are all extremely harsh, but there is something intriguing and deep about their caustic sound. On the rare moments when your own head isn’t banging, it’s lots of fun to see the band thrashing around on stage.

As In We is a gem of high octane music, immaculately composed and expertly performed. They just returned  to Santa Fe to a loyal fanbase, after being on tour earlier in the year. Although I consider them Metal, this band transcends genres, and is indeed an experimental blend of different styles. I would say Post-Prog-Instru-Metal, but that just makes me sound like a douche.

In a night dominated by Prog,  Torn Between Worlds  stood out as the only Grind band. Each fast-paced, aggressive track is introduced by a sound clip, then the musicians proceed to violate the audience’s eardrums. Out of the whole line up, this was the only band to incite a mosh pit. As usual, they fuckin’ killed it.

Scale The Summit offered a stark contrast to the relentless fussilade of Torn Between Worlds. This band has a musical style so smooth that it borders on jazzy.  Although  they were very smooth and ambient, they still had the virtuosity and intensity that defines Metal. The guitarists are very talented, and there are some moments of Satriani-esque shredding.  This would make a great soundtrack to sipping brandy out a human skull by the fireplace, wearing your burgundy velvet robe and reading Chaucer. This is a pristine example of melodic instrumental music, with a variety of influences that extend beyond the Hard Rock circuit.

Intronaut makes some stunning music, and their sublime melodies were given a cutting edge by their thunderous percussion. This is another group that balances intensity with precision. Their formidable stage presence was amplified by projected images. The visuals morphed from soaring eagles to burning embers to abstract kaleidoscopic effects, and so on. I overheard one audience member muse: “I don’t know if I like them or if I was hypnotized into liking them.” Unlike that dude, I know for a fact that I love this band, but the trippy visuals didn’t hurt.

So there you have it. That was about 5 hours worth of hard-hitting, crowd-pleasing, ass-kicking music. Five stars outta five for sure!

Tags: All Ages As In We Distances Intronaut Scale The Summit Torn Between Worlds Warehouse 21