Once more, I must apologize for my hiatus from writing, though in my defense, this particular digression was fueled by neither drugs nor laziness. Instead, I got my ass kicked in a mosh pit, and have been in recovery ever since. I’m mostly intact, sans a few teeth and higher brain functions, but otherwise alive and well. Let’s take a flashback to that infamous night, the legendary Monster Bash of Warehouse 21. 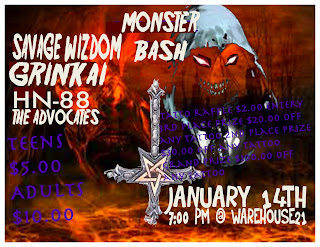 The Advocates were mass-appealing funky rock in the vein of Rage Against The Machine. They played with enough charisma and talent to make most local rock bands envious, a feat even more impressive when you consider this was their first live show. On the other hand, being unknown, they didn’t have a large audience, yet those who were present will probably become loyal fans.
Next on the bill were local legends Grinkai, infamous Death Metallers who boast both brutality and musicianship. Although their music is of an abrasive, barn-burning variety, the distorted riffs hint toward some kind of catchy melody. The band has gained notoriety in the local scene for their unique brand of marketable psychosis. There’s no one else like them, for better or for worse.And as usual, I loved every second of it.
HN-88 claims to be kid-friendly, but they’re really Blink 182 in disguise. Yet it is a thin veil, and I have come to expect innuendos, graphic violence, and other teenage shenanigans I know and love from 90’s Pop-Punk. So they’re not kid-friendly so much as a magnet for rebellious teenage girls, or burnt out Metalheads filling the void with guilty pleasures (such as myself).  It was like Vans Warped Tour all over again.
Finally, Savage Wizdom took the stage. If you don’t know who they are, either read more of my shit, move to Santa Fe, or download all their songs. It’s worth it, trust me. It was during this last set that the pits got even more rowdy. I’m not entirely sure what happened, but I’m pretty sure people got knocked out cold and had to be rescued by their friends. On my end of the deal, I got a bloody nose, a few bruises, and though I can technically eat solid stuff, it hurts like hell. Guess I’ll just have to consume liquids… *glug glug glug*

So, ultimately, there was Funk, Death Metal, Pop-Punk, and traditional Heavy Metal all in one night, not to mention hot chicks, booze, and grievous injuries. Hell yeah, can’t wait ’til next year! Four stars outta five!