Long story short, I’m dressed in drag trying to look like Toki Wartooth. Don’t ask how things got to this level. Even as I type, innocent passerby are gawking at me in my altered state. I am little more to these people than an amusing anecdote that they will describe to their sober friends in the near future.

By the way, the teddy bear isn’t in any way unusual. I always have Antar with me, as evidenced by the creepy/lame facebook profile I made for him.
Actually, there is a reason I’m doing this nonsense. Tonight is the Drag Ball at my stupid school (St. John’s College), so I put minimal effort and dressed normally but with an eyeliner ‘stache. But for those of us who have better things to do, there’s this: 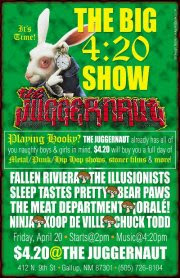 I’m all about the local scene, but sometimes that just becomes tunnel vision and I forget that every town has a local scene of it’s own. So for once, I’m gonna shut up about Santa Fe and Albuqurque and talk about other New Mexico shows. This one is in Gallup. The fact that there’s a band called “Orale!” makes me so happy that I can not possibly articulate my ecstasy. And when I saw the price of admission, I started laughing like Beavis and Butthead. 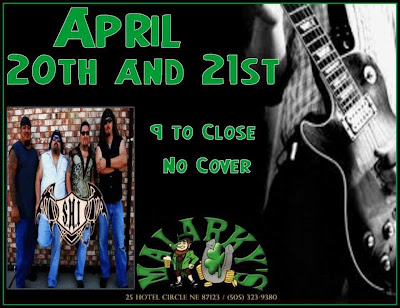 So that was my token flyer for a show that takes more than an hour driving time. Enough of that nonsense. Albuqurque’s own Malarky’s bar will be hosting a Metal show with… Uh, those guys in the picture, I guess. And it’s not just on 4/20, but on the recovery day as well. NO COVER?! Being a cheap ass, I love this concert already. Too bad I’m 20 years young. 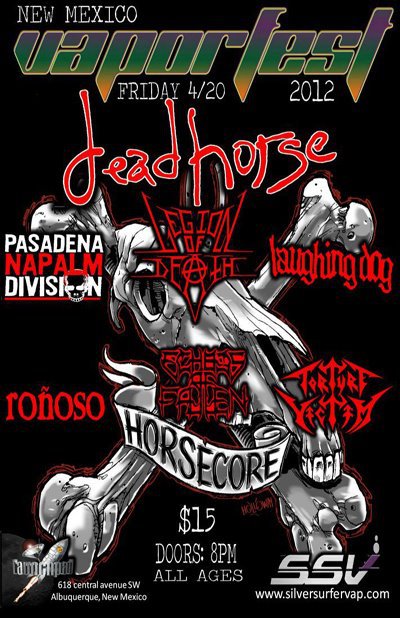 Launchpad fucking rules. This is the only venue that I’ve ever seen host an all-ages battle of the bands. There’s also a bar adjacent to the concert room. There’s grime and glitter all over the damn place. And they’ve proved their worth for all-ages shows yet again with this magnificent freaking line up. Laughing Dog is old school Death Metal, who have become notorious in the local music scene thanks to their amazing performance at Bloody Ear Fest ’09. Echoes Of Fallen are genuine, unrefined metal who blew me away at The Gathering Of The Sick a few years back. Torture Victim has hit the stage with the likes of Toxic Holocaust, Eulogies Of The Forgotten, and even punk bands such as Domestic Violence. I don’t recognize any of those other bands, but I would sell my soul just to see the bands that I know. They rock that hard. 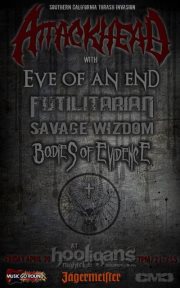 I already told you mongrels about this show. Eve Of An End were the worthy winners of a recent Battle Of The Bands, so you might want to check them out. Futilitarian is atmospheric, heavy fucking metal. They used to have vocals, but they rule so much that their transition to Instru-Metal was virtually seamless. Savage Wizdom is like NWOBHM: Traditional metal saturated with power chords and Halford vocals. Bodies Of Evidence are pretty damn killer too.
You may notice that I started this post around 4:20, and it is now 6:14. On a normal day, this would have taken me like 45 minutes. Happy 4/20 everyone.  🙂