As usual, I’ve been incapacitated due to a lethal combination of booze, skating, and schooling, but my writing sucks anyway so no-one minds. Anyway, Warehouse 21 still has a monopoly on all-ages Metal in Santa Fe, so let’s see what’s on the agenda… 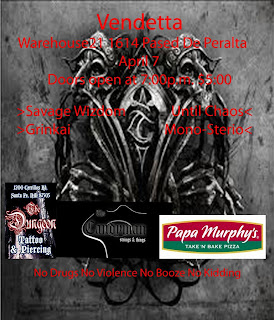 …Oh right, Savage Wizdom and Grinkai, AKA two of the most talented bands in the whole freaking state. Savage Wizdom is a flashback to good ol’ NWOBHM. Their style of Power-Metal is beefy, catchy, and occasionally theatrical. (Just don’t knock someone out cold in the mosh pit this time, you guys. Damn barbarians…)

I can’t find much about Until Chaos that’s not on the infernal digital cesspool known as Facebook, so I guess we’ll all be content to know the very basics. They’re a Rock n’ Roll band from Albuqurque. That is literally all I, or anyone else, has to say. I hope their music is better than their profile gives them credit for. The photos look promising, so let’s see what they got.

What the hell is a Mono-Stereo? I think my older brother had one of those in the early 90’s, and he would crank it while doing drugs with those creeps from Logical Nonsense. Ah, good times. But apparently the band is indie-rock, though. What the hell is indie-rock? Like, independent? I don’t get it. Cheryl fears/loathes anything different from her norm, but I’ll give this “indie-rock” a chance and see what happens. Don’t be surprised if I bail to get my fix of Metal, which always and forever will be my comfort zone.

The show is this Friday, April 7th. Like most  W21 shows, doors open at 7 PM and the cost at the door is $5. It’s an all ages show, so leave the booze at home and drink yourself to sleep when it’s over. 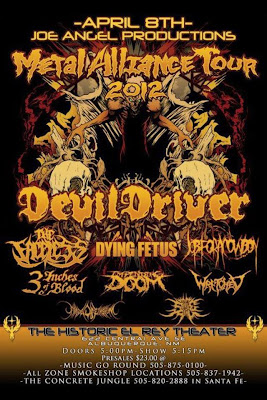 And on Easter Sunday, we have this. The line-up is so cherry that it hurts. However, Fields Of Elysium are in some band drama, so let’s see if they’re up for this. Devildriver is pretty cool, even if their songs all sound alike. Dying Fetus is amazing, and this will be the first time I see them in concert. I know approximately diddly-squat about Job For A Cowboy, but at least I know they’re famous. 3 Inches Of Blood is a pretty generic name, but the music kicks ass. Impending Doom, Wretched, and some other third band are also playing. Tix are $23, and you can purchase them from the bands or from the Concrete Jungle smokeshop. Then again, this gig is probably sold out by now, but don’t say I didn’t tell ya.