Making their music in the heart of the war torn Middle East, Al Namrood are one of the most innovative black metal bands in the industry. With the release of Enkar, their most recent album, they continue to be a driving force with fans all around the globe. Undead Goathead probes into their unique situation with this latest interview. Enkar is available in digital, CD, and vinyl formats on Bandcamp. 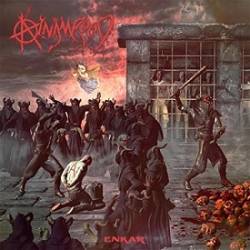 Undead Goathead: Has anything changed since you’ve started this band?

Al Namrood: Oh yes, we manifested and developed remarkably, as you can notice the improvement in our tone throughout the years. More experience gained, more insight on how to design our sound, better studio equipment, and more hatred from the people hahaah.

UG: How is the new album, Enkar, different from your previous albums?

AN: Enkar (which translates to Denial) is a special release devoted to anarchy and political despotism,  where we specialized the theme toward punkish black metal, we wanted to do such a concept as it fits our message and ideology in AlNamrood, it has a special logo which clearly shows that Al Namrood is fed up with the authority and political bullshit, fed up with nationalism and ignorance, fed up with classism and capitalism, fed up with hypocrisy and corruption, fed up with how the sheep are following blindly, and of course fed up with the most intoxicating disease which is religion. Musically, we intend to push the sound of first wave black metal, with some flavoring Thrash and punk attitude with little add up of Middle Eastern sound, the package at the end should sound catchy, dark, heavy and Namroodish!

UG: How does your music impact the world? On the other side of that coin, how have world events influenced your sound?

AN: We understand it strikes as shock that such a work rises from Arab country where Islam is the predominate system, we received many comments saying that we are determinate and courageous, other describes us as having strong standards to be sighted in this world, we are glad we have made such a rebellious impact, the world always need to be reminded that people do not tolerate oppression.  We have utilized this oppression in our environment to cast out a heavy assertive music, with self-determined, firm vocal; it can express our feelings, illustrated by the artwork which completes the goal.

UG: Musically, you sound as heavy and badass as ever. Why do you think your songs are so powerful?

A music that has meaning will always be presented as strong, we stay true to ourselves and that show very clearly in our music, the vocals take you from aggressive to dramatic to energetic to sad moments in one song, the music speaks for what a thrashing torment the Middle East is.

UG: I am intrigued by your mysterious song titles, such as Ruhab al’ajanib (Xenophobia) and Ainsaf (Halves). What is the meaning behind your choice of words?

AN: Xenophobia was written by our vocalist Humbaba, he wanted to write his experience with the nationalists and xenophobic creatures.  I agreed to the idea and wrote the suitable music for it. Xenophobia articulates the phenomenon of nationalism and how it is spreading in the modern age, powered by government and classist people. It is a big loath for such a fear and self-centered life.

Ensaf which actually translates to Justice is purely about the failure of developing freedom in Arab society, because as long as religion and ignorance are ruling, there won’t be any freedom. The failure of Arab Spring is citied in this song and the poor future of Arab freedom is seen now.