Soul To Rest is one of the most popular metal groups in Santa Fe for a reason. Their style is caustic, melodic, and energetic, a very Whitechapel-esque combination. The recently released CD, Clamber Of Chaos, never recieved the hype it deserves. Soul To Rest concerts are most triumphant, so how would their recordings measure against the standard they set for live shows? 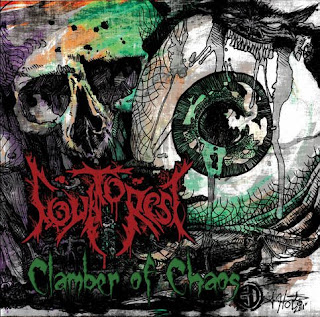 The album gets off to a good start, opening with the band’s magnum opus, Like Sheep To Slaughter. This opening track is an undisputed masterpiece. The vocals are demonic, the melodies thrashy, and the composition sublime.Other tracks have been refined since their release on an untitled demo. Siphon The Beauty has evolved for sure. The intro no longer sounds like an ameteur cover of I Stand Alone, and now has a distinct sound unto itself.

Pitiful One, a former favorite until Sheep To Slaughter was composed, remains a testament of the prowess and musicianship of the band, being simultaneously heavy and catchy.The brilliantly titled Martyrdom Of The Divine is a barn-burner of epic proportions, rivaling the masterpiece that is LSTS. The remastered Hands Of Malice and new track Early Morning Massacre, although great songs, get lost in the mix.

The CD as an entirety is reminiscent of Whitechapel’s style, although Soul To Rest guitars have more hooks and the drums are not as overbearing. The vocals are as wicked as the lyrics themselves, and all of the musical elements are cohesive. As a whole, the album is consistently badass, but a few songs are even more intense than the others.

Although not commensurable with the phenomenon that is a live Soul To Rest concert, the CD is very high quality with evolved heaviness and virtuosity from the band’s humble beginnings. Four stars outta five.