This weekend was wack. On Friday, there was the kick-ass Metal show at Warehouse 21 (see previous post for details). Then there was a Punk Rock baby shower on Sunday (Congrats, Sophie and Jay!). And in between, there was this untitled epic concert on Saturday. 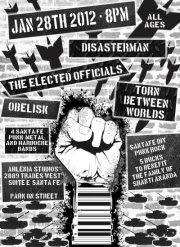 It was a bizarre, mysterious show from the get-go. First of all, the concert didn’t have a title. Then the venue was some creepy studio in the middle of a freaking industrial zone, and the owner of said studio is still of unknown identity.﻿ On top of all that Hills-Have-Eyes-esque atmosphere, I had never heard of the band Disasterman and I didn’t know what to expect. Nothing is worse than paying five dollars for a show only to be disappointed, let alone in the backdrop of a damn Z-grade horror movie.
The crimson glow on the cinder-blocks was a constant reminder that I was quite literally in the red-light district. Thankfully, each of the bands rocked to high heaven, and somehow or another I survived, despite being drunk as a skunk and mind-altered in ways that, for legal reasons, shall remain undisclosed. What I will forevermore refer to as “The Truck And Tree Incident” played a major role in my mindset before the show even started, so let’s break down the night into manage-able chunks, starting with Obelisk.
Ah, yes, Obelisk. I love these dudes to death, yet I still have difficulty explaining their sound. Their self-described “Party Sludge” is close enough. The Metal style is caustic, dance-able, energetic and brooding. The instruments are a little doom-y with a cool groove, and the vocals are intense as can be. I’m still not doing them justice, but I assure you that they put on one hell of a live show. They were the perfect band to kick-start the night.
The Elected Officials take righteous indignation, set it to the melody of playground ditties, and amplify it to high heaven. They embody hardcore, Punk-as-fuck, “Oi Oi Oi” music with a message. They hit the stage like a Molotov cocktail hits a skyscraper, conquering the venue with their wicked charisma. Rebels with a cause have never sounded so good.
Next up was Disasterman. I can’t tell you enough how suspicious I am of duos. Prior experience has taught me that such ensembles are risky. However, my expectations (or lack thereof) were defied. To say I was “pleasantly suprised” is a drastic understatement. “Blown away” is a little more accurate. Rarely have I seen two dudes play with enough talent and energy to hold their own against full-size bands.
Headlining was Torn Between Worlds. These local legends are a taste of dirty, thrashy Death Metal at it’s finest. Every show of theirs results in lethal mosh-pits. I’m sure at least one of my  head-injuries owes its existence to these guys. Their music is superb, but the mosh-pits are even better. The night ended with a bang, an immaculate conclusion to a concert such as this.
And on top of all that, there was booze, soda, and frito pies. Have you ever drunkenly devoured New Mexico food at a Metal show? Trust me, if you do, it will the best night of your life. This show was one for the books, no doubt. Five stars outta five.