Skip to content
This is the second installation of a 3-part review, putting the spotlight on my favorite Technical Death Metal musicians. Today’s post will feature the badassery that is Fields Of Elysium. 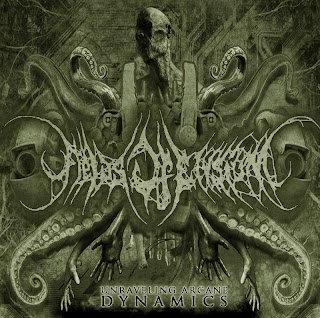 Metal, presumed dead since the  90’s, has found its afterlife in Fields of Elysium. The atmosphere created by this Santa Fe based band is astronomical, as evidenced by such song titles as Decomposing Celestial Mass and Zeta Reticuli. Although they seem out of this world, the band brings everything down to earth with Sentient Worm and the all-too-human tragedy in Ramblings of Madmen. The dichotomy of celestial spectacle with earthbound profanity is reflective of the paradox which defines the band. Painstaking technical riffs portray emotional overdrive, madness turns into art, and even the sanctity of metal is tainted with jazz. However, this genre-fusion is not a mere gimmick. It a sincere innovation, saturated with the artistic intent to push musical limits.
This dedication eventually culminated into the collaboration with Dead World Syndicate,  and thus they produced their first studio album, Unraveling Arcane Dynamics. Since the 2009 release of this album, the band has prioritized the stage over the studio. Fields has used this time to their advantage, honing their already superb musical abilities. New tracks, including an instrumental piece, are to be released in the near future.
Meanwhile, Feilds is armed to the teeth with intense time signature changes, polyphonic sound walls, and compositional complexity to rival the best in the industry. While these elements are admired by other composers and musicians, the untrained ear may only hear insanity. But as the lyricists themselves so eloquently stated, ” Listen to the ramblings of madmen, for they speak words of wisdom.”
…Need I say it? Five stars outta five.