This is a 3-part series in which I will review the best Technical Death Metal bands I’ve ever seen. In a genre as complicated and intense as this, it takes a certain X-factor to stand out against the crowd. The following bands have that type of talent, so let’s start off by giving mad props to Viraemia. 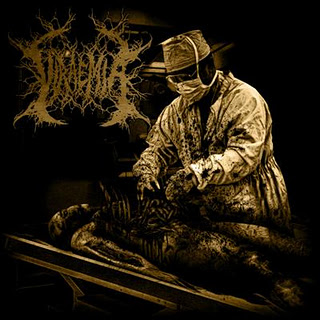 Viraemia has fallen into a common rut, as many of their songs are indistinguishable. However, the trained ear or die-hard fan can differentiate each song, and since each composition is superb, it doesn’t matter too much if they sound similar. The music consists mainly of intricate sweeping, relentlessly fast and brutal. The vocal style is guttural with low, deep growls. The lyrics are the crown jewel of the band, as they revolve around a medical theme. The gimmick of fucked up diseases and professional terminology lends a sense of realism to an otherwise over-the-top ensemble. In fact, the realistic themes make the whole experience that much scarier. The overwhelming intensity of Viraemia certainly isn’t for everyone. I myself prefer to put their self-titled CD for a spin when I want to kill someone I hate, but I don’t want to deal with a lawsuit. The alternative (or soundtrack) to homocide never sounded so good. Four stars outta five.