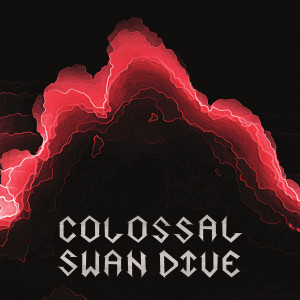 Colossal Swan Dive is a band that is  hard to define by subgenre: Their distorted, aggressive sound embodies a metal style that is timeless. Nick Marez plays the triple role of lyricist, vocalist, and guitarist, accompanied by David Goldstone on bass and Gabe Archuleta on drums.

This self-titled debut is fairly minimalist, by metal standards.  Musically, the trio play straightforward and to the point. Being skilled musicians, they don’t need to dazzle audiences with outlandish theatrics, nor do they confuse speed for talent. Hell, even the album art reflects the down-to-earth nature of the band. It appears to be a sonograph erupting into jagged chaos, perfectly portrayed in the stark contrast of black, white, and red. They have also forgone the trite cliches of  symmetrical but illegible band logos for a simpler design, whose angular structure is reminiscent of Nordic runes.

Somes songs are more formulaic and repetitive, while others highlight the band at their best. Blacked Out is one such track, with a bitchin’ guitar lead, raspy gutterals, and and an infectious rhythm that you can’t help but bang your head to. The Trek is another interesting, if deviant,  example: It starts out with deceptively mellow riffs, which make the brutal parts sound even more intense. Paralyzed and The Gamble are also exemplary songs, featuring guest vocals by David Ahern-Seronde (currently in Yar, formerly in Obelisk and Oscillation). As one of the best vocalists in the local scene, his distinctive, deep roar brings a whole new dimension to these two tracks.

In its entirety, this album is expertly constructed. The tracks segue into each other seamlessly, and the dynamics between the different instruments are well-balanced. The recording quality is fucking cherry; the only thing better is actually seeing them live.  It’s a solid album, but I feel that its life is cut tragically short at only 40 minutes. Check it out on bandcamp and spotify, where you can listen to previews or purchase the whole thing.

This  debut is an excellent start. The music is impulsive, raw, and just plain cool.  Three stars out of five!