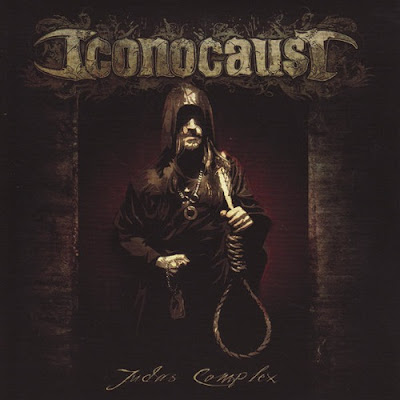 Before I even heard any of their music, I already assumed that Iconocaust would be devoid of clean vocals. With this band, however,  melodic singing coexists with the growls and screams we all know and love. In addition to these contrasting vocals, some songs feature no vocalizations at all. Strategically placed instrumentals pepper Judas Complex. Speaking of instruments, the guitars and bass are a nice flashback to the thrashy, catchy hooks that skyrocketed The Big 4 to fame in the late 80’s/early 90’s. The drumming is awesome, as the band seems to be characterized by an extremely rhythmic musical style.

Although I usually prefer indecipherable vocals that sound like a rabid devil, there will always be a place in my cold black heart for melodic singing. With Iconocaust, even the harsh vocals are intelligible. This is actually a refreshing change of pace, because sometimes it’s just a pain in the ass to read lyrics while listening to a song just to know what the hell is going on. Which brings us to our next subject: The lyrics!

I am not authorized to post full lyrics here, but believe me, they’re wicked. My favorite line from the whole album is “Your body won’t be found.” It’s so brilliant in its simplicity. This is the genius of the band: They seem to be characterized by subtlety rather than the over-the-top style that defines most Metal bands.

The orchestration and musicianship of the band is pretty sick, but what really gives them a cutting edge is the kick ass lyrics. One thing I’ve noticed about underground Metal groups is that their break-up songs are INCREDIBLY bitter. (Note to self: Never cheat on a musician. His subsequent compositions will make me notorious for being a skank.)

Last but certainly not least,  Judas Complex has some awesome artwork. Last I checked, a hooded dude with a noose isn’t supposed to be sexy, but then again, who cares. I am also delighted by the fact that the CD itself looks like a coil of rope.

All in all, Iconocaust is clearly inspired by old-school thrash, but since Judas Complex was released recently in 2009, elements of modern Metalcore are apparent. It’s not bad, but you should still see them live. I love their instrumental style and harsh vocals, but frankly, I don’t care for the clean singing.  3 stars outta 5.