I missed the Gaza show, due to the clusterfuck that passes as “Public Transportation” in New Mexico. Being stranded in the sketchy side of one of the most Meth-saturated cities in the country is pretty Metal, but it’s also pretty fucked up. So I cut my losses and drank an ungodly amount of Absinthe while listening to their stuff on Myspace. However, I am severely dissappointed that I didn’t get their autographs. I saved my  June ’11 edition of Terrorizer Magazine, in which they had a kick ass review, solely for this purpose. It was then that I realized, this has been a pretty false year for us Metalheads.

Flattus Maximus is dead, for starters. Not to mention that May 16 was the anniversary of Ronnie James Dio’s death. And when heshers weren’t busy dropping like flies, bands were busy  breaking up. In my neck of the woods, we just lost Suspended, the ONLY all female Metal-band in the Albuqurque/Santa Fe area. Fields Of Elysium lost their drummer. This Days Light lost their vocalist. Grinkai decided to take a break from live concerts. Both Cassovita and Futilitarian converted to The Dark Side (Instru-Metal), and The Cast Aside apparently quit before they even started. What the fuck?

Meanwhile, legendary icons of the genre have seriously gone downhill. If you haven’t listened to Iron Maiden’s The Final Frontier, don’t bother. It will break your heart. Same is to be said of Queensryche with thier immensely dissappointing Dedicated To Chaos. Final Frontier somehow manages to be simultaneously predictable and dissonant, whereas Dedicated To Chaos sounds like a “5 Gum: Stimulate your senses” commercial. It is a far cry from the beefy, heavy origins from which the bands had begun. How the mighty have fallen.

I missed many amazing concerts, and yet others were dissappointments. The local scene is in a retarded Catch 22 when the bands don’t want to perform for a small or tepid audience, and the fans don’t show much support because they think that bands don’t want to play. The situation was worsened when we lost venues. Little Wing and The Compound are now defunct, leaving Metalheads under 21 in a really picarious position. And on the offchance that we get the opportunity to see a phenomenal act perform for cheap in an all ages venue… The goddamn train comes only once and an hour late. That is so false that it hurts.

I’m bumming myself out now. I’ll look on the bright side, i.e stare at these Death Metal panties. By the way, my birthday is on the 25th. These would make a most excellent gift. Honest. 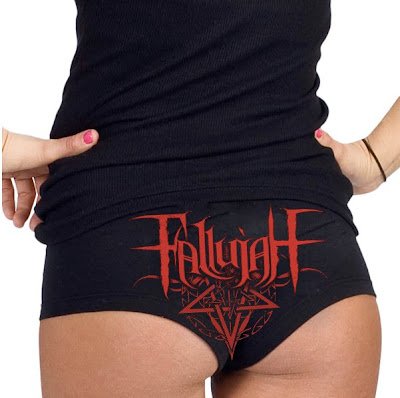