Last post was super-false, but my computer bit the dust, so I had to use an ancient monstrosity that runs slower than hell. Anyway, now that my horrible incident of terror is over, I can bring you a (slightly) higher quality of writing. It’s still going to consist entirely of random stuff I should have said a long time ago, and in a more aesthetically articulate manner, but I’m too fat, lonely, and poor to care.

First of all, the Tech-Death/ Aliencore band Rings Of Saturn are dropping a new album on Nov. 20th. The album will be named Dingir, after the Sumerian word for “diety” or sky”.  Their first album, Embryonic Anamoly, set the bar pretty high, but Dingir seems promising, as evidenced by this sampler.  And as is usually the case with Tech-Death, the album art is as intricate as the music itself. Awesome. 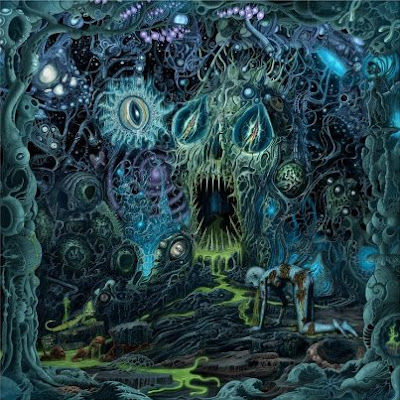 Meanwhile, for those of us who need something to do until November, there’s the Slaughter Survivors tour. It hits my neck of the woods at August 16th, but the tour is also hitting Denver, New York, Hollywood, and other big-shot cities. The line up is amazing. I can’t brag enough that I actually went to high school with Fields Of Elysium, who happen to be one of the biggest bands in New Mexico, Metal or otherwise. Fallujah appeals to a similar fanbase, but they are a more atmospheric style of Metal.  Weslandia were the worthy winners of a recent Battle Of The Bands, and they also happen to be a Christian Metal band. Don’t be talking smack or I’ll stab you with my crucifix. The rest of the line up is pretty rad, but I can’t do them justice. You’ll just have to see the show. 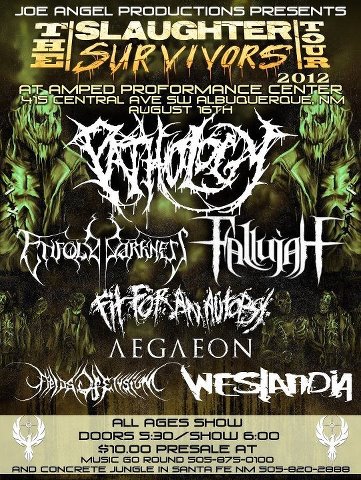 On a far more depressing note, someone jacked the gear belonging to Animals As Leaders. As in, they punked the instruments, equipment, and even the freaking vehicle. So if some sketchy ass-hole on the street tries to sell you a suspiciously awesome guitar at a low, low price, you have my blessing to kill him. Meanwhile,  if you have any info on their stuff, you can contact them at animalsgear@gmail.com
I’m really burnt out, so I can’t really think of anything else that pertains to Metal. Well, except that the new episodes of Metalocalypse are freaking hilarious. And I have such a huge crush on Toki Wartooth that it truly makes me sad that he’s not real.
This post is sad… I’m just gonna listen to Muknal and OD on store-brand Mountain Dew. Peace.
Tags: Animals As Leaders Dethklok Fallujah Fields of Elysium Joe Angel Productions Muknal Rings Of Saturn Weslandia